Would You Let Small Boys Play With Matches? 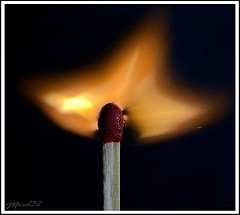 I taught my 6 year olds how to light matches the other day. More importantly, I taught them how to put them out safely.

Do I recommend that everyone just run out and buy matches for their young sons? Nope.

Hubby mentioned the other day how much older the boys seemed to act after they got the bb guns for Christmas. He’s right…they even did seem to stand a bit taller after that. (Ironically the younger boys rarely ask to shoot their guns. I haven’t figured that one out yet.)

I had that in mind when The Manager and the Captain asked if they could see the box of matches the older boys had used for a Scout event Saturday. After some careful thought, I got out the box of matches and had the boys fetch a small bowl of water. We sat down on the floor and I opened the box.

We looked at the matches together; they each got to hold one while we talked. The discussion included

After more discussion, I had each of them light a match and then extinguish it in the water. Surprisingly they were both hesitant to actually strike the match. I’m counting that a good thing. 🙂

There was a small buzz of excitement when big brothers got home, and since then the matches haven’t even been mentioned. I’m figuring that’s also a good thing. The big boys were a little miffed because I never let them try out matches, but in their case there wasn’t anyone around using matches. The playing field changes when you have younger siblings involved.

So basically they’re trained in match management, the novelty has at least been reduced, and they’re not dealing with any kind of forbidden fruit sort of temptation. Was this the best idea on the planet? Time will tell. I wouldn’t have done it if I thought they would get into the matches later and burn down the house.

I don’t think they will.

What do you think? Have you addressed the “playing with matches” issue in your home?

Earnest Parenting: help for parents who teach their children to handle matches.