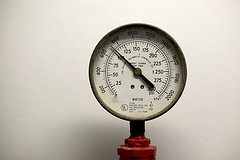 I think one of the MOST difficult aspects of parenting (for me at least) is knowing how and when to set limits. Just like the piano battles I mentioned the other day…there are also other areas in which I find conflict with the boys.

It’s always been very important to me to create an environment here at home where the boys would feel very safe. I want home to be a place they’d like to stay, rather than chasing them off. We’re heading into the teen years soon with the older boys; this increases the importance of keeping home attractive.

I bet you’re wondering, where’s the problem? Quite simply, it’s the fact that the boys want to stay home and not leave. Whenever I announce that we have to go somewhere, there is a great deal of wailing and gnashing of teeth. Lately their big issue is how awful it is that we’re making them go to Tae Kwon Do and they want to know when they can quit. Hubby and I see a great deal of value in pushing through and sticking with the sport, and we want them to do so.

Once they get to class, there are smiles and they have a wonderful time. Hubby doesn’t hear all the complaining, in fact they assure him that it’s fun and great and terrific. (He does hear some of the grousing, just not as much because they do a lot of it before he gets home.)

Last night was the perfect example. They had an extra Tae Kwon Do class because they needed some experience working with different teachers before their test next week. As they were heading out the door, TechnoBoy was joining in the chorus of complaints and said, “Well, we’re going to this class for no good reason.” That was my limit and I sharply informed him that “because your parents think it’s a good plan” was plenty enough reason and that he’d better knock it off.

When they came home Hubby told me that they’d done a fantastic job, had impressed him greatly, and that they enjoyed the experience. We discussed the complaining and Hubby said that I can’t stop people from complaining. We agree that there needs to be a limit.

I feel a little bad about pushing them to do things. We’re heading into the school year which means I have to put on my Pushy Mom hat. Keeping the boys motivated to do their schoolwork is an effort. Which, now that I think about it, could be why I dislike pushing them otherwise. I was mostly self-motivated when it came to schoolwork growing up…probably 80% I did on my own without pushing. Except for 6th and 7th grade, when my parents had to step in and insist a bit more. So I don’t really understand the complete unwillingness to do…anything. In my world, you do something simply because it needs to be done. The boys don’t operate that way.

Sooooo, all that to say that ugh. This is hard. I want them to do things (besides playing computer or watching television) because they want to.

In the meantime, they still have to take piano lessons and do a sport because we as their parents-in our somewhat finite wisdom-say that they should. It’s fine if they change activities, but I don’t think they should just drop things and stay at home.

Anyone else experiencing this?

Earnest Parenting: help for parents who need to keep their kids going.