I Met a Singing Lizard 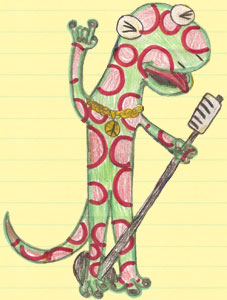 Well. I haven’t met her in person, but I have heard her sing. Really, I have! The Singing Lizard is the work of Liz DeRoche, who is pre-releasing AlphaBeat, an album your kids will love.

I played some of the tracks and both Captain Earthquake and The Manager give the songs 2 thumbs up. Each. Much dancing and smiles took place here at the Earnest Parenting Product Test Studio (aka my basement).

The first song on the album is called AlphaBeat and it’s a new version of the Alphabet Song. I thought at first that the boys would brush the whole thing off thinking they were too old, but they really enjoyed the track and requested it again later on.

Generally speaking AlphaBeat is targeted at younger children, with titles like The Wheels on the Bus, Row Row Row, and Bump On the Log. The Singing Lizard also has custom gift packages which range from $25 to $100 depending on what you request. She’ll even write an original song personalized just for your child.

I was contacted by someone representing Liz asking if I’d review the album. And! She kindly offered to let me give away a copy here on the blog! I love doing that. 🙂

If you want to win a copy of AlphaBeat, leave your name in the comments below. Contest will be open until 11:59pm Eastern Tuesday, October 27. Winner will be announced on Wednesday October 28, 2009.

**Note: We here at Earnest Parenting were kindly given a copy of the AlphaBeat CD. No other compensation was offered or given for this review.

We have a winner! Congratulations to Naomi Lundeen, commenter number 7. I used Random.Org and her comment was chosen. Enjoy the CD and the baby girls Naomi!!