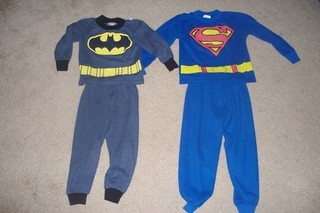 There was no way to stop a day like this from happening.

After all, boys grow. Fabric wears out. No way to stop that. Uh-uh, no-how.

The superhero jammies first appeared in our family back in 2001, if I recall correctly. That was the Halloween I discovered that pajamas are cheaper than costumes and have a longer life-span. After a jaunt around the neighborhood, the outfits made daily (and nightly) appearances for months.

When they’d been outgrown a year or so later, the pajamas were packed away to wait for little boys to discover and love them again. It was 4 years before they saw the light of day, and were once again the source of many pretend adventures.

Even though the pajamas were clearly too small a year ago, the younger boys insisted on keeping them. The capes have long since disappeared, the sleeves and legs are too short for boys who are 7 years old, and the knees are threadbare or torn.

And yet? They are loved. When I pointed out that really, it was time to give them up there was much protest. We compromised by wearing them until the weather was too warm, then I took the pajamas and set them aside. It seemed to work; nobody complained or seemed to miss them.

Eventually I forgot about them myself, only to be surprised when they reappeared last month. The Manager had spotted them in my room and immediately dug them out. Both he and Captain Earthquake again played superhero, neither one caring about the legs that only made it to their shins, the missing capes, or the gaping holes in the knees.

Sadly for two boys, the possibility of getting stuck in clothing that could cut off circulation has become more and more real. The time has come to retire our heroic jam-jams and move on.

Earnest Parenting: help for parents who need to retire some jammies.