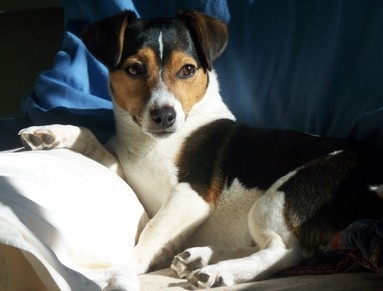 Wheweeee! Today has been interesting. Sorry for the extremely late Fun For Your Friday, Internets. When we got up this morning, the puppy was all growly and didn’t want to get out of bed. I saw her sitting outside looking mighty forlorn, and she was making an odd movement repeatedly with her head. Kind of like hiccups, but the spasms were in her neck instead of her midsection. After coming inside, she threw up twice. The boys were not impressed but they cleaned it up.

She was slowly improving when I called the breeder to ask for advice (she recommended Pepto Bismol). After a run to the store and a rather impressive poop episode, I gave Keely the Pepto. She didn’t like it, by the way. About 30 minutes later, I was on the phone when the kids announced that she’d thrown up. Again. This time, they said it looked like a big pile of dryer lint.

It was when they found the ribcage and various internal organs that we diagnosed the dog as a rodent-eater. LOL. We spent the rest of the day keeping an eye on her, even canceling our plans because we didn’t want to leave her alone in case of any problems. I’m pretty sure she’s going to be all right. She was feeling well enough to be mighty annoying this evening!

Sooooooo, I totally forgot to post the Fun For Your Friday blog carnival until now. OOPS!! Ya’ll can have some fun on Saturday, right? Here are this week’s submissions.

Casey Markee presents 15 Most Disgusting Creatures Found In South America posted at GIC Argentina Blog, saying, “Start your weekend off right with this unique and interesting post from study Spanish in Argentina provider GIC Argentina. From a vampire catfish to the Brazilian Wandering spider, check out 15 of the most unique disgusting creatures South America has to offer. You won’t believe your eyes!”

Isabella Smith presents 50 Filthiest Jobs on the Planet posted at Radiology Technician Schools, saying, “These messy jobs and the hardworking men and women tasked with them on a daily basis require exposure to hazardous chemicals or gases, disease-carrying microbes, dirt, and numerous other dirty, disgusting dangers.”

Leah Dudley presents When The Going Gets Tough…The Tough Use Duct Tape posted at LeahDudley.com.

Jimmy Camut presents Laughing is No Joke: The Gift of Laughter posted at ManifestWell.com, saying, “You are never going to believe the trick I played on my very own mother while I was at her house the other day.

Casey Markee presents 15 Fictional Boarding Schools We Wish Were Real! posted at Boarding School Wizard Blog, saying, “From the Hogwarts School of Witchcraft and Wizardry to the X-Mansion of Uncanny X-Men comic book fame, check out these 15 fictional boarding schools from books, movies and comics that we WISH were real!”

Earnest Parenting: help for parents who own puppies that eat rodents.