We Need A Plan 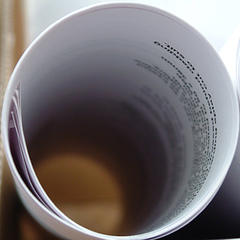 A battle that the older boys and I keep returning to is pretty straightforward: I think they should work. They disagree.

Early in school, we struggled (A LOT) over learning issues. They’ve definitely grown past those, but somewhere along the line the picked up the idea that life should always and only be fun. The corollary to that is that work is evil and should always be avoided.

Sadly, they spend more time and effort avoiding work than what they’d spend if they’d just do it.

My own frustration over having to continually fight the same. stinking. battle often boils over. It makes no sense to me why I should have to continually prove the point that they are expected to work, and that work should be done to the best of their ability with at least a straight face. We’ll work on cheerfulness later.

Every time the issue arises, the conversation is the same. They resist, I insist, they avoid, I get annoyed, they pout, I shout, then they do their work. Why not just do it in the first place? Why waste all that time and energy on a fight that they WILL lose every time?

Part of the problem could be the homeschooling itself. Because they don’t have a point of comparison, they don’t realize how much time and effort their peers put in daily. Which begs the question: maybe they need to try out public schooling. It’s a frequent conversation.

Sending them out of anger would be problematic, so Hubby and I are trying to get them to weigh the pros and cons when everyone is calm. So far, the answer is the same: “We want to stay home.”

Last week, I got frustrated again. Every single task that the older boys completed was only because I hounded them. I do understand that 12-year-old boys are easily distracted and so on. But I should be able to say “do your work” and then just check on them occasionally until it’s my time to actually teach a lesson. I should not have to babysit them through each and every item on their list.

Before I got angry, I sat them down and explained that I was not speaking in anger. Totally calm here. But here’s the thing. If they went to public school, I’d have approximately 4 hours every day that could be spent working on something that would bring income to the family. Then we talked about what kinds of things extra money would buy, and what kinds of privileges that would bring.
TechnoBoy made an excellent point saying, “Yeah but we’d only have 2 hours a day to enjoy that.”

Absolutely true. But there’d still be more stuff and more opportunity in life. So I posed the question: “Why should I spend my time on you and not on a job?”

They didn’t have an answer.

So then I asked whether they’d like to try public school, and a discussion of the pros and cons followed. Both boys said no, they want to be home.

Surprisingly, both boys wrote out a plan like they meant it. The Mercenary even affixed his signature to his. They got up early the next day and worked pretty well. Today has been a bit slower, but it’s still not the horrible avoidance of before.

Some will say I’m foolish to hope, but maybe this time the changes will stick.

Earnest Parenting: help for parents who need a plan to survive.