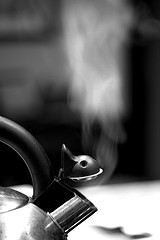 I’m going to come right out and admit that I had a meltdown on Saturday. I had just picked up the older boys from a friend’s birthday party and was relating to them how their father and I had taken apart the trailer in their absence. We were expecting to just replace the wood, but there’s enough rust on the metal parts that we’ve decided to get it sandblasted and repaint. I explained to the boys that we might know someone who owns an auto body shop and I was going to ask him if they do sandblasting, and also if he’d be willing to show the boys around the shop. They’ve been watching some auto repair shows on television lately and I thought they’d be thrilled at the opportunity to see some of the work in action.

The Mercenary’s response was: “Ah, that’d be boring. I want to learn how to do all that work myself.”

This is actually a pretty typical exchange around here. I come up with an idea for something that I think they’ll love, suggest it, and they shoot me down. If this was just an occasional happening, I wouldn’t mind. I’m all for input from the stakeholders. After years and years of it though, I’m getting to the end of my patience. I’ve even asked them to come up with their own suggestions of things they’d like to do (within reason) or learn about. So far, there have been very few ideas.

Probably half the time I’ve gone along with dropping whatever idea they’re poo-poohing. As a result, we don’t go out for many enrichment activities with other kids and I listen to a LOT of complaining whenever I drag them out to activities.

A new homeschool co-op is starting up in our area, and as soon as I mentioned it to the boys, they gave the usual responses. “That’ll be dumb/boring/a waste of time/not cool.” I was this close to saying that they don’t have to go and meet new friends and have new experiences when The Mercenary opened his big mouth on Saturday.

Well friends, no more. Even though I myself was nervous about doing the co-op and getting the rest of our schoolwork done, we’re signing up. They no longer have a choice in the matter, they’re going to go and try it out. It’s only ten meetings, and if we hate it we don’t have to sign up again. But at least they’ll see some other homeschoolers and have some practice taking a class.

And that’s not all. There are other things coming up that boys will just have to shut up and attend because holy cow. We can’t spend all our lives here at home. They have to start taking some steps toward independence and get some experiences under their belt. What if they went off to college (ulp…in 6 years) never having sat in a classroom learning environment? That wouldn’t be good.

How are they going to learn things like welding or auto repair if they don’t go to a place that work is being done? We’re not just going to learn by watching it on television.

So! We’re all about doing things I know they’ll enjoy around here. Or at least trying them anyway. And I’m learning not to even suggest things or offer choices. I just let them know we’re going to do such and such. Perhaps enough exposure to new activities will get their creative juices flowing.

Either that or I’ll have another meltdown and growl at people.

Earnest Parenting: help for parents who want their kids to have experiences.