Making Sure Twins Are Individuals May Mean Leaving One Out 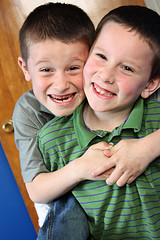 When the older (and then younger) boys were born, we did not give them rhyming names, and I rarely dressed them alike. If someone gave me duplicate outfits we usually used them on different days. It was a lot about letting them be individuals and so on. As soon as they showed any interest in clothing we had them choose what they wore, only limiting if the item was too torn or dirty for public consumption. Matching didn’t matter (I do confess to giving some helpful hints here and there). We wanted them to feel separate at least a little and not like a unit, just because they were twins.

They’ve thus far shared bedrooms because we don’t have enough for everyone to have their own, and we also tended to have them enroll in the same extra-curricular activities. Because driving back and forth to different things in different towns seemed overwhelming and impossible. For the last year and a half or so, we’ve encouraged different activities as well. The Mercenary chose basketball last fall/winter, while TechnoBoy played soccer in the fall and spring. There was minimal overlap and each boy has had the opportunity to develop friendships alone.

The Mercenary made friends with a boy in basketball that TechnoBoy doesn’t really know. We’ve invited him to one event where both our boys were present, so they’re acquainted. But the friendship is really between the boy and The Mercenary. This is fine and wonderful and as it should be. He’s a great kid, as far as I can tell. Both Hubby and I love the idea that friendships are blooming and that boys are getting some “me” time somewhere. Having someone your same size and age always in your everything can wear a bit. We understand that.

Enter the difficulty: the friend invited The Mercenary to a really wonderful outing next week. What do you do in that circumstance? There’s no way I’d suggest that the twin get invited too, because that’s just rude. TechnoBoy tends to be more of an individualist, while The Mercenary loves to surround himself with people. When they’re together, it tends to cast TechnoBoy out. It’s just a personality difference, but it’s starting to hit home a bit.

Perhaps I’m worrying about the whole issue too much.

As it happened, the friend invited TechnoBoy as well. I hadn’t even breathed that concern to anyone but Hubby, so I don’t know how that all worked out. They’re going to both go and it should be a wonderful day. But eek. This is going to happen again. The Mercenary was not completely pleased, because he was looking forward to a day of his own. How do you deny someone else a great experience like that? I get what he was feeling, it’s totally understandable.

The whole dynamic is difficult though, until we work through some of this. Anyone else ever face this problem? What did you do?