Sentry Safe Helps Protect Your Valuables in a Fire 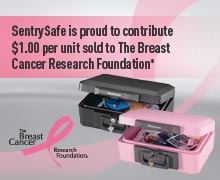 I will admit it: I do spend time worrying about what would happen if a disaster struck the house. If we’ve been away for an extended period, I always breathe a sigh of relief to see that the house hasn’t burned down in our absence. While worry isn’t the best choice, taking action to protect your important belongings is very wise. To that end, I’ve been thinking a lot lately about getting a safety deposit box so that our important papers would be saved in case of fire.

The problem with the safety deposit box plan is that I can only get at it during bank hours. And then there’s the rental fees. Blech. That’s why I was so excited last week to learn that Sentry Safe manufactures products that will protect your belongings in fire and flood. Who knew?? They were kind enough to send me a Pink 1100 Fire Safe, which is tres awesome because my boys are naturally repelled by pink. (They did examine it closely though, and if it weren’t pink I probably wouldn’t be allowed to keep it. Heh.)

The reason it’s pink is because Sentry Safe is donating a portion of the sale of those safes to the Breast Cancer Research Foundation. And! If you check out their Facebook page they’re doing amazing giveaways every Monday in October. Last week it was a safe and a Wal-Mart gift card. Check it out!

Sentry Safe also did a live demonstration of one of their bigger safes last week and I was privileged to watch. They burned a safe at 1500 degrees for half an hour, then raised it 15 feet off the ground and dropped it. After the firefighters pried the thing open (and they had to work to do it), the contents inside were only a little warm. I was surprised. And I won a Big Bolt safe in the corresponding Twitter contest. So exciting!

Something else that Hubby and I have been discussing is getting each boy his own lock box. Because they share rooms, sometimes cash and other junk precious belongings get mixed up or lost. If each boy could have his own lockable treasure box, that might reduce the problem.

Anyway. The whole reason I wrote this post is to tell you that I get to do a giveaway! I love giveaways. We’re trying out a new system for giveaways (don’t you love it when I experiment on you?). It’s from Rafflecopter. Just use the widget below to enter the random drawing. You can do one or all of the options, totally up to you. Contest is open from now until 12:01 am on October 30, 2011. Winner will be announced after close of contest.

FTC disclosure: Sentry Safe gave me a Pink 1100 Fire Safe for free, and I also won a Big Bolts safe in one of their Twitter contests. I do think their products are amazing, and I just may give each boy a Sentry Safe 0500 Fire Box for Christmas. But let’s keep that a secret until after the holiday, okay?