The Mystery of Twin Speech 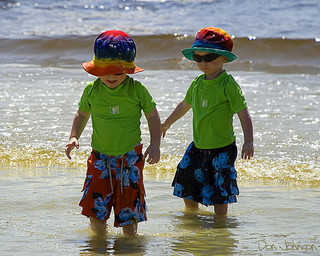 Everyone loves twins. The concept of twins still fascinates most people; the idea of two human beings born that look alike and have the same DNA. There are common false beliefs that twins share the same finger print or that they can read each other’s mind, but there is an idea that is little more realistic and believable. It’s the interesting and more mysterious twin concept; the theory that young twins have their own secret language to communicate and it’s called twin speech. I am a twin and have an identical twin sister that is 7 minutes older. My family told me that we had our own twin speech. A little more about the mystery of twin speech:

What is Twin Speech?
Twin speech is also known as twin talk or referred to as the scientific term cryptophasia. According to wikipedia.com the definition of cryptophasia is ‘is a peculiar phenomenon of a language developed by twins (identical or fraternal) that only the two children could understand’.

How and why it occurs?
Parents and researchers state that this twin speech happens at an early age before their twins learn their own language. It is a form of communication that they believe the twins can legitimately understand. The language is usually a lot of made up words, your typical baby babble. But what is different is that when one twin is speaking to their other half, the twin listening nods and responds using different sounds and made up words. There are many forums, videos and articles online about twins using twin speech, one example is a twin speaking and the other listening leaves the room and comes back with a toy. Then the first twin that was speaking acknowledges and appreciates the toy, almost like they had discussed the second twin going and retrieving the toy.

Is Twin Speech real?
There are many skeptics and not enough science behind it all, but researchers are still trying to unravel the mystery behind it all. Skeptics tend to blow it off as baby babble and nonsense or some parents believe it’s a start of a speech impediment because of the ‘gibberish’ spoken. The flip side to the coin is if you ask parents of twins and believers of twin speech, they stand behind twin speech 100 percent. Until science can prove that twin speech is in fact real, twin speech is just a rare and fascinating mystery among twins.

Whether your believe it to be true or not, the idea behind it all is enthralling. Watch your twins and start listening. You never know what they could be saying.

About the Author
This guest post is contributed by Debra Johnson, blogger and editor of live in nanny.She welcomes your comments at her email Id: – jdebra84 @ gmail.com.