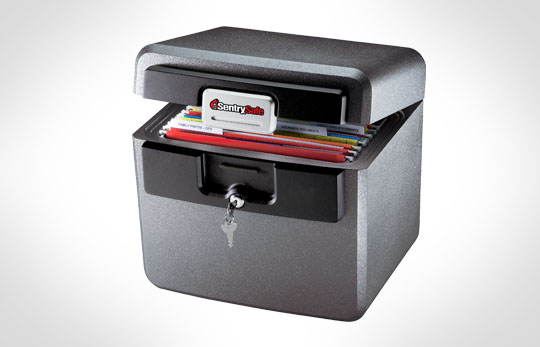 So, did you watch the Sentry Safe live burn yesterday? Such a neat event! If you were a prize winner, YAY! I love that kind of thing. I won a Big Bolts safe last year; it’s so great!

Annnyhow. In tandem with the live burn event, I get to give away a couple of safes. (And! More in September and October!!). The first one is the Compact Safe P008E, a portable safe that you can take with you. It tethers to the secure location of your choice, such as the inside of your car. In fact that’s where I plan to keep ours. It’s perfect for locking up small valuables while you’re on the road.

Did I tell you about Hubby and I catching the kids trying to break into cars at the fair? Yup, we did. We had dropped the boys off and decided to take a quick catnap in the van before joining them. We each leaned our seats back and Hubby was zonked in no time. I couldn’t sleep, so I just sat there quietly. That’s when I noticed 2 boys going from car to car checking doors. Eventually we followed them across the lot and had security throw them out. They’d actually made it into a vehicle when they were sent out of the lot.

I’ve told the boys all their lives not to leave valuable items in the car where they can be seen by passersby. This safe can help with that. Just tether it, put your items inside, and tuck it under a seat in the car. Voila! The other safe I get to give away is the Fire-Safe HD4100. You should SEE this bad boy! It’s quite heavy, and will protect your belongings against fire, theft, and flood damage. It’s just the right size to hold file folders. I think I might use it for some precious memories though. We’ve got old videos and negatives and I’ve often thought about what would happen if there was a fire and we lost all those memories. In this safe, they’ll be protected. And I don’t have to worry about trying to get everything out of the house in a crisis. It’ll all be safe until I return.

And here’s the great part! A giveaway. I love giveaways. Click on the Rafflecopter widget below to enter. You can get entries by liking Earnest Parenting on Facebook or sending out a Tweet…things like that. And here’s the great thing! If you’re already a Facebook friend or Twitter follower, you get instant credit. Easy peasy!

Contest will be open until 12:01 am ET on Sunday, August 26 2012. Safes will be randomly awarded, and winners notified by email. Good luck!