How to Help a Baby Turn Over 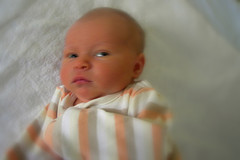 When the older boys were super tiny, like just a very few months old, turning over suddenly became a huge goal for The Mercenary. No kidding, he struggled and flailed and howled until he did it. I was so surprised! He was way too young at the time. We laid him on his back again, and sure enough he did it again. This time I was able to videotape him (yes, we really did use video tape back then). Once he’d accomplished it, he didn’t try again for months.

I have no idea what he was doing.

All babies learn to roll over eventually, but there are times before they do it independently that you may need to turn them. There’s a safe way to do it, as the good folks at Howcast show you in this video.