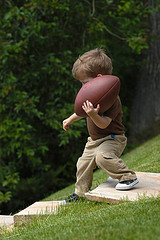 Many parents wonder if putting kids on a sports teams is really worth it, with the amount of risk and danger that come with playing contact sports.  However, there are some huge benefits to getting your kid active and involved on a team. It’s not just physical activity either. There are social, emotional and leadership values that are taught with every team sport. With popular sports like youth football, you can still teach your kid to enjoy socializing and teamwork while also taking part in educating yourself to help promote player safety.

The NFL is a higher level organization that has really taken the initiative to make changes to increase injury prevention in contact sports. For example, the organization has changed rules concerning where and when defenseless players can be hit, such as quarterbacks and receivers catching the ball. It also has changed other rules such as prohibiting grabs to the helmet or tackling with the helmet. In addition to these new rules, the organization has also started NFL Evolution, a program to help educate kids and parents about injury prevention when playing contact sports. As a parent, it’s awesome to see a powerful organization stepping up and taking some responsibility for the injuries that can happen but also how to make those injuries less severe and even preventable. There’s a lot to learn from this campaign.

Some of the injuries that were most prevalent included head injuries, knee injuries, heat stroke and dehydration.

Head Injuries
Concussions are actually considered minor brain trauma, but if you’re a parent, there doesn’t seem to be anything minor about it. These injuries can cause memory loss, nausea, headaches, confusion and dizziness. In addition, recent news stories have broken about hearing loss due to head injuries in NFL players. The NFL Players Association has teamed up with EarQ, a hearing aid supplier, to work with former NFL players dealing with hearing loss. It’s a prevalent issue as well among youth athletes who can start playing football as young as six years old and go until they’re over 30. With that in mind, it’s important to recognize how you can prevent head injuries.

– Kids must learn how to move their bodies and avoid hitting head first when tackling.

– Go to the doctor when something isn’t right or if there was a big hit to the head, whether knocked down or hit by an opponent. It’s important to get checked out early.

– Don’t allow kids to play until they are 100 percent healed and ready to play again.

Knee Injuries
Another serious injury involves knees.  Torn ligaments in the knee can end an NFL player’s career. ACL tears are the most common. An ACL or anterior cruciate ligament is essentially what holds the knee together and allows it to shift and rotate with versatility. An injury to this ligament and you’re in danger of losing the mobility you once had. Many players think they can go on with a knee injury but they only make it worse by not resting and allowing it to heal properly. There are ways to prevent tears to the ACL and kids should practice these safety tips:

– Train your body for better balance and agility so you can stay light on your feet.

– Build strength in your leg muscles and around the knee to lessen the chances of tearing an ACL.

– Wear supportive braces (if recommended by a doctor) when working through an injury but remember to rest up and don’t push it.

– Always stretch before and after any practice, training or game time. It’s important to loosen your muscles and alleviate any tightness.

– For knee problems, it’s essential that you get started early with rehabilitation, so see a doctor as soon as possible. Don’t wait until the injury gets worse.

There are also some injuries that relate to the conditions that players find themselves in when playing a sport, particularly in the hotter months of the year. Summer sports are often subject to extremely hot days. During these times, it’s important to avoid games in the middle of the day when the temperature is at its highest to avoid heat stroke.

It’s also important to remain hydrated. Drink water before, during and after practice, training or games to ensure that you always replenish your body’s supply of water.

Injury prevention can be easy if you help kids figure out what they need to do and also learn techniques yourself to teach player safety.

Hi my name is John O’Connor, I am a father, outdoorsman, sports enthusiast and passionate about living a healthy lifestyle.  Check out my new blog at bloggingwjohno.blogspot.com!

Earnest Parenting: help for parents who want their kids to play sports safely.