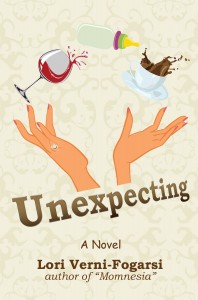 Heroes, I read a novel. This has been happening a bit more often, which is pretty nice! I usually stick to online reading, sale bills, magazines, and catalogs because I just don’t have time for more. When an author suggests I review their novel, I kind of like the idea that I HAVE to do it. It’s my job!

So, yea. I read Unexpecting, by Lori Verni-Fogarsi and wow. So incredibly vivid…I still feel a little bit like I was reading about real people and not fictional characters. In the story, Shelley and her husband David are almost done raising their family. The last few children are finishing up high school and going off to college. Life is good. Settled.

Then one day, the doorbell rings. When Shelley opens it, she meets Alexandra, a pregnant, 17-year-old daughter that no one knew they had. Instead of planning vacations and empty nesting, David and Shelley are catapulted into life as grandparents. Trying to connect with Alexandra and blend her into their family meets with…problems. When Alexandra’a behavior starts to get erratic, there are hard choices facing the couple.

Lori Verni-Forgarsi has written a book that is vivid, gritty, and almost graphic*. The characters were so real as I was reading that I found myself flooded with helpless anger at one character, and heartbreak for another. I can’t tell you who, because that would ruin the story.

*Note: I said this book is almost graphic. That is true. If you’re not comfortable with stories that include more intimate scenes between characters, then this giveaway is not for you. It’s not R-rated or anything, but it is a very intimate story.