How Do You Dress Your Kids for Halloween? 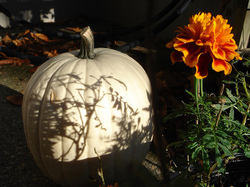 One problem I have had with Halloween over the years is of a geographical nature. How do you dress a child for Halloween when you live in the southern part of the United States? Every year it is a challenge as to whether you dress them in winter Halloween costumes or summer costumes. If you go with summer costumes it seems to never fail that they end up wearing a coat over their costume and if you go with a warmer costume they end up sweating all the way around the neighborhood and complaining every inch of the way. Typically I would go with the summer costume and if necessary make them throw on a coat and sort of flash the “treater” a glimpse at the door.

I imagine that is the way it works up north every year at Halloween unless you dress your children as polar bears or Sasquatch. They probably have to deal with a coat every year. I frankly cannot remember what we did when I was growing up because I did live in the mid-west. But again my motivation was not if I had the best costume, my motivation was strictly the treats!

I guess we owe the costume overload these days to commercialism just like everything else that pertains to our children and their varied desires. Television in my day and television now do not even come close to comparing. In my day there was only really one good channel and two snowy ones and it was all black and white. There was no channel changer and television went off promptly at ten o’clock asking the question, “It’s ten o’clock, do you know where your children are?” And then the Indian chief pattern would come on and it was lights out. Not that I got to see that too often but once in a while on the weekends we would actually get to stay up until ten! Can you see the difference in our world today? I do not even remember commercials but I am sure there were some because how else would we know what to tell mom and dad we wanted? Movies were limited as well, we did not see tons of movies and when we did they were nothing like the Avengers, Hulk, Iron Man, and the like that are out today.

I am sure a lot of you are already geared up for Halloween by this time and some of you may just be starting to think about it. My kids are older now so they do not ask me for help too often with costumes. It is still a quandary for them to figure out if they should be getting geared up for hot or cooler weather. You notice I did not say cold as it is seldom cold here in the south, at least compared to the rest of the country. But to us southerners the slight change in temperature is overwhelming at times because some of us do not even own coats. We have to start digging out the few winter clothes we own and brace ourselves for the icy cold two weeks of winter. Where ever you live in this great country, have fun this Halloween!

Author Bio:
Elizabeth Reed is a freelance writer and a resident blogger at Liveinnanny.org. She particularly enjoys writing about parenting, childcare, health and wellness. In addition, she is an expert consultant on issues related to household management and kids.