Top 3 Mobile Games of 2013 that can Keep Kids Occupied 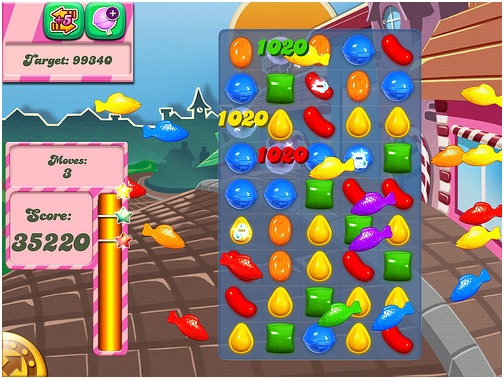 We’ve all been there: sitting in the backseat of a car while our parents sit in the front and talk about how much fun we’re going to have at Aunt Mary’s house. While they may be right, this doesn’t stop us from being bored in the back, eventually causing some form of mischief. In fact, this may actually promote the mischief. Here are a few of the top rated mobile games that can keep your kids from wreaking havoc on the trip to Aunt Mary’s.

Candy Crush might have been released on Facebook in April 2012, and for smartphones seven months later, but it really is the success story of 2013. By March it had surpassed Farmville 2 as Facebook’s most popular game. No one could have predicted how addictive matching colored candies would be – except the toddlers waiting in line who manage to find the only bag of skittles under the chocolates. They know a thing or two about being colorful.

The game can be a definite life saver when it comes to keeping kids occupied while offering them mental stimulation without the clunking television set or the machete wielding bad guy. If your Aunt Mary happens to live somewhere where cell towers get all of no reception, maybe it’s time to check out how satellite internet works. That way, you can always have a backup plan for those times when the story of how the dog chased the cat on family vacation just gets to be too much.

Fetch: Beauty Inside and Out

The gorgeous graphics of Big Fish Games’ Fetch have people raving, but its heart is what’s touched so many gamers. Reviewers have compared it to a Pixar movie because it’s aimed at a young audience but adults aren’t left out of the loop, in case you get bored during your vacation. It stars a sweet young boy named Milo who sees his dog Bear captured by a creepy fire hydrant. Determined to set things right, Milo embarks on the adventure of his lifetime. Players help him on his quest by completing a series of mini-games.

This game teaches kids a thing or two about not giving up. Plus, the storyline will keep them entertained for hours on end. Depending on what time of day (or night) you’re traveling, and how much winter reading you want the kids to get done, this game could end up being a little more than a godsend.

Most kids will bother their parents about getting a pet. Parents, we all know that having an animal is like having another child: a lot of work, a lot of time, a lot of financial stability, and a lot of accidents. Sometimes it’s just not feasible to get an animal, especially if you’re trekking the mountains to your relative’s house Henderson style. So, let your kids play out their fantasies with this pet collecting game. This game allows you to take care of the animals, feed them, lay with them, and now dress them up in hilariously cute costumes.

Sometimes, it’s necessary to leave the devices in the hands of the kids for a little while; especially, during that trip up to Aunt Mary’s. What other games have you heard of that are decent for the little ones?

Earnest Parenting: help for parents who know that sometimes, an electronic game is just the ticket. In moderation, of course.