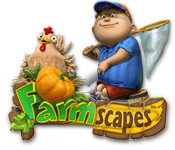 Heroes, I have a small confession: I really enjoy playing computer games. I play a few of the big ones you can find on Facebook, and have enjoyed one of the major role-playing games for several years. Not that I get much time to play that one really. The social media games are handy because I can play them on my phone for a few minutes at a time without feeling guilty about wasting time.

When the good folks at Big Fish Games suggested that I try out a few of their offerings, I was a little skeptical that I’d find something that I enjoyed.

Boy was I ever wrong.

There are SO many games available! I think that most anyone could find something entertaining on the site. I personally chose the hidden item category, and ended up trying out Farmscapes. (Each game can be downloaded for a one-hour free trial, so you have plenty of opportunity to test them out before purchase.)

Heroes, I liked it so much that I went ahead and bought it myself. Essentially, you play match-3 or hidden-item games to earn points. Then you trade those in to upgrade various areas of the farm. It’s a super cute game, has quite a few levels that are well-defined and entertaining, and good for both kids and adults.

The only problem I had with Farmscapes was the part where I got a bit addicted and didn’t want to stop playing. I finished my first farm already and have been working on the second one more slowly.

Since I’d been offered a free game to try, I went ahead and downloaded Gardenscapes 2 this afternoon. This game? Even more fun. I was especially impressed when the game started out with a dedication to parents. The setup is similar: earn points to upgrade the garden. In this game, you earn points by playing the hidden-item games. Interestingly, The Mercenary likes the game a lot. I didn’t expect a 15-year-old to get so involved, but there you have it. He was right there finding missing items, and most definitely had opinions as to which decorations we should buy.

It was quality time together.

In addition to finding new games to play, Big Fish Games has been generous enough to let me do a giveaway! The winner will get to choose a $15 card to either iTunes or Google Play. Simply use the Rafflecopter widget below to get entries. Winner will be chosen by random drawing after contest end, which is at midnight Eastern time on January 31, 2014.