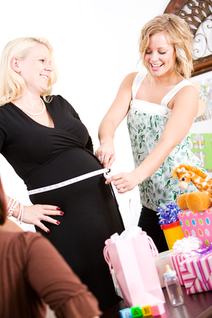 According to tradition, a first baby is celebrated with a shower but not subsequent little ones. However, as with many traditions, this has changed with time and second (and even third or fourth) pregnancies are celebrated with what is known as a “baby sprinkle.” Similar to a baby shower, a sprinkle celebrates the arrival of a new baby but with fanfare. Rather than showering mom-to-be with a lavish party, she and her baby are sprinkled with love and gifts of necessity in a more intimate setting.

Why Have a Baby Sprinkle?

First and foremost, a new baby is about to enter the world and regardless of how many siblings are anxiously awaiting its arrival, it is still cause for celebration. And while gifts should not be the driving force behind your party, if the mother-to-be is expecting a baby of the opposite gender or one who will be born in a different season from the first child, gift items such as gender or seasonally appropriate clothing become a necessity as well as daily essentials like infant diapers.

While sprinkle celebrations are gaining popularity, they are still a touchy subject for some. Case in point: A heated debate of more than 200 response is still ongoing on About.com as to whether second showers are appropriate or not. Given the debate, and since subsequent celebrations are typically smaller affairs, limit the guest list to immediate family and close friends. On a case-by-case basis, it also may be appropriate to invite guests who did not attend a shower for a previous child.

Like any baby shower, theme options are endless. For the second time around, you may want to get a bit more creative than “It’s A Boy” and “It’s A Girl” themes. Not only is your friend a mom-to-be, but she also already spends her time chasing a little one. Consider hosting a party dedicated to relaxation and pampering. You can easily transform the shower into a group spa day by piping in soothing music, providing an array of healthy treats and teas, and planning some “me time” activities such as mini-manicures, quick chair massages and face masks. Alternately, if a large number of guests have children, offer a kid-friendly event to avoid the need for sitters. Incorporate shower games that both moms and kids will enjoy like bottle races, bobbing for pacifiers or baby food taste tests. Most themes appropriate for a first shower also apply to a second, so the options are limitless. Party supply sites like Party Pail are a great resource for more information on themes, decor and favors.

With the first baby comes strollers, car seats, cribs and changing tables, most of which were likely gifted at the first shower. While the first baby has likely outgrown these items, or at least will in time for his sibling’s arrival, smaller gifts such as diapers, bottles, bibs, clothing and toys are ideal for the second baby shower, It is still appropriate for mom-to-be to create a small registry as a guide for guests but any large items, such as a double stroller to push two little ones around, should be left to word of mouth. You can then add a simple note to the invite stating, “For group gifts, contact [insert the host’s name].”

Stacy Harris
Stacy is an interior designer who specializes in nurseries and children’s bedrooms.

Earnest Parenting: help for parents who are thinking about hosting a baby sprinkle.