A Much More Successful Day 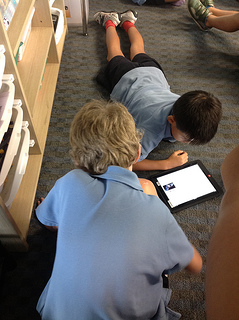 Well. Today was a complete change from yesterday.

Hubby put the boys to bed right after soccer last night, which means they went down right around 7:30. Unbelievably, there were still children asleep after 8:30 this morning. We got up and going, and zipped right through school lickety-split. I sent the older boys out for a break and recess at eleven and called the younger ones in for story time and Letter People. When that was done, I sent them outside as well and worked on editing a paper for CyberSon. The older boys came back in around 11:40 and I asked them to get busy on their silent reading. At noon they each came and shared with me what they’d been reading and we spent some time laying in the sunshine in front of the slider window talking and snuggling. Eventually we decided to get science out, which was a magnet activity. It was such a hit that the younger boys joined in.

Around one, we cleared the table and headed out the door. I picked up lunch at BK (their request) and we drove about 30 minutes to a nearby town to drop off some things to a friend. Then we headed over to the quilt shop and the boys shopped for buttons while I purchased enough fabric for the quilt I’m going to make at my retreat next weekend. The boys were really amazingly cooperative and (fairly) quiet while I picked out the fabric.

On our way home, TechnoBoy moaned slightly about how much time had been spent away from home, especially since there was a soccer game planned for the evening. I reminded him that he had a good day at school, a snazzy new button collection, a new iron (we found one just perfect for boy-projects at the quilt shop so I bought it), and a happy Mama. All those are good things.

Soccer went very well. I think those boys have a talent for the game. Both The Mercenary and TechnoBoy really played well. Afterwards I stopped at the store for groceries while Hubby brought the boys home. They showed him their science experiment and had their snack, and went to bed shortly after I got home with the groceries.

I’ve tried various contracts, agreements, and charts over the years. But none of them ever stuck. I did check out a new site yesterday called Chart Jungle. They have quite a few very handy pre-made charts available for free download. I didn’t wind up choosing one, but I may have the boys look at some options tomorrow to see if they’re interested. I like the idea of using a chart of their choosing to track success. I already have a giant book of reward stickers. May as well find a way to use them.

An interesting conversation took place on the way home this afternoon. TechnoBoy asked me if once we finish working on finishing the basement we’ll have more time to spend with them. I pointed out all the things we’d already done together today and asked if after all that, he still felt like I didn’t give him enough attention. He wasn’t real sure of the answer. I explained that I wasn’t upset or angry, but that I count school time as time spent with him. Doing lessons is something I put effort and part of myself into. That counts as time spent together. And it counts as good time. While I was at it, I asked him if he’d thought about the possibility that boys who finish their schoolwork early every day could have more time for fun activities in the afternoon.

He’s thinking about it.