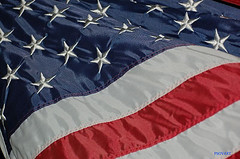 On our vacation we stopped and spent some time at the United Flight 93 Temporary Memorial in Shanksville, PA.

When I was looking up our vacation route last month I noticed that we were going to drive within about a half hour of the crash site of Flight 93. As soon as I pointed that out to Hubby we agreed to make it a priority to visit. I goofed (can’t get used to the limited exits on turnpikes) and we missed it going South, so we made sure to stop by there on our way back by. It took some extra time, and involved driving on some steep hills and curves in a driving rainstorm-which was terrifying, thank you very much-but we made it there. The memorial is staffed dawn to dusk seven days a week by 43 local volunteers who tell the stories of the passengers and answer questions. The very sweet lady who was there during our visit made sure to spend individual time with the boys, letting them look at the pictures and explaining everything in terms they would understand. I just stood behind and tried not to sob as she showed an overhead picture of local schoolchildren standing in the parking lot of the town school in the shape of the words THANK YOU.

See, the town of Shanksville is very small….population 250. The school has a total of about 400 kids in grades kindergarten through high school. Turns out, if that plan had flown another 17 seconds it would have crashed into the school.

Can you imagine? In a town that small, an entire generation could have been wiped out in a single stroke. I still can’t wrap my mind around that.

Another cool story from the site: When the first responders arrived, they drove in on a mining road. The land there is mostly owned by a couple of coal mining companies. The plane dug so far into the soft ground (as a result of the strip mining that had happened there) they literally couldn’t see the plane from their vehicles. When they walked to the scene, a Bible belonging to a couple on the plane was found just at the edge of the crater. In the midst of all that chaos, death, and destruction the Bible was in almost perfect condition. Only the cover was bent. The pages inside were completely undamaged.

And then there are the volunteers. 43 of them. Staying there, guarding the site and honoring some very special heroes. Every day. Rain or shine. That’s dedication. If you go to the official site Honor Flight 93 you’ll see that many of the folks involved in moving this memorial from its temporary state to permanency are locals.

Oh. Another one. When we stayed in Somerset, PA on our way to Virginia there was a group at our hotel that had been out at the site the night before. I gathered they were filming a documentary. This time they had a singing group and apparently gave a concert. The organizer stood up and made a speech to everyone at breakfast while we were in the room. If I heard him correctly, this is their 26th visit to Shanksville. I wish I could tell you what he said but all I remember is that it was just so eloquent.

He talked about how the heroes of Flight 93 have such a legacy for us all, and how going to the memorial helps all of us remember what’s really important. He sure got that right.

If you get the chance at all, please do stop at the site and talk to the ambassadors and see the things people have left and the words they’ve written. It’s very moving.

The group that is raising funds for the permanent memorial hopes to have it up by 2011, the tenth anniversary of the crash. They’ve gotten some money pledged by the state and federal governments but still need to raise 30 million dollars. To date, they have almost 7 million. If you’d like to donate, you can do so at the website or by mailing a check to Flight 93 National Memorial Fund. c/o The National Park Foundation PO Box 17394 Baltimore, MD 21298-9450.