When You Lose Your Temper 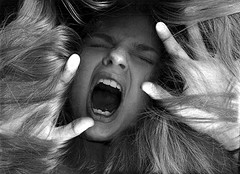 Just yelled my head off and sent all the boys to their rooms.

It started this morning when I was fetching dirty laundry and asked The Mercenary to bring any stray clothes down to my room so I could sort and wash them. (Note that I do all the washing, drying, and folding of clothes in this house – except for when my dear mother-in-law visits.) The Mercenary found a pile and was carrying it through the house when he dropped some and asked TechnoBoy to help. TechnoBoy was practicing his piano and said, “No.”

The Mercenary was not pleased. I’d prayed first thing this morning for help in controlling my tongue and finding ways to deal with situations that were more Love and Logic and a lot less Lecture. So, as I walked by I tried saying sympathetically, “Yea, I get real frustrated when that happens to me too.”

I figured he’d just pick up the pile of clothes and bring them down. He did pick them up, but then chose to take them over to his brother and rub the dirty laundry in TechnoBoy’s face. I attempted to remain calm, and told him that was just awful and sent him to his room. After a cooling off period, I tried to talk to him about it, mentioning that people who act in service to others enjoy peace when they’re not all the time counting how much work they’re doing. I even thought up a whole post on the topic.

After getting the laundry in and making my breakfast I told the younger boys they had 5 minutes until we were going to start their work. Cheerful replies were heard. When I actually called them, Captain Earthquake cried and pouted up a storm. Then he tossed a bowl of cereal on the floor, and this was after I had hugged him and reminded him that school is fun and we always have a good time. What was bugging him is the transition, and that I understood how hard it is to change from one activity to the next.

Had him clean up. Using the vacuum hose cheered him up and I called the boys to the table to start. By now it was 11:24, and I was starting to get anxious about time as there are some have-to-do’s on my list today. This was when The Manager started pouting and crying over every little thing. We tried to play Simon Says for math….he pouted. Tried to play the left and right game…he pouted. And so on.

At the same time I was trying to keep the older boys moving through their schedule (have-to-do’s, you know). This involved getting them started on what turned out to be incredibly difficult science experiments that required them to drill a hole through a cork and slip a straw through. We also needed to cut the bottom off a plastic jug, figure out how to attach fins to the cork, and more. I was trying to get the younger boys’ math lesson started, and called them to the kitchen because today we’re going to measure water and color it with food coloring. All fun things for boys to do.

I had the audacity to ask them to come with me to find containers of different sizes when The Manager started pouting. Again. For some reason, coming to the breezeway at his mother’s request was just too much and he was rude and uncooperative with me.

That was when I lost it.

I yelled loudly and sent everyone to their rooms. Granted, the older boys had less direct involvement with the whole thing so I’m trying to figure out what to do from here. They do have some responsibility in terms of acting like this for so many years in front of the littles thus giving them the idea. And the whole laundry incident still really annoys. It smacks of bullying, which I absolutely despise.

I really hate the whining and pouting too.

Now I have to figure out what to do from here. Yelling at boys hasn’t really improved anything, and I need to figure out something that will actually help. I admit I have a short fuse when it comes to pouting over school. I’ve fought the bad attitudes for so many years, and I want to just have happy times.

Unschoolers will tell me that I’m being mean, yada yada by having structure. I disagree, and do not plan to argue the point. The very fact that our day is structured is non-negotiable. I am working my tail off to make things engaging and fun. In my opinion, the kids need to be bringing some effort and good behavior to the table as well.

Guess I’ll talk to the older boys first. And yes I will apologize. I still need some way to deal with the pouting. How do you handle pouting?