That Was When I Put Peanut Butter in His Navel 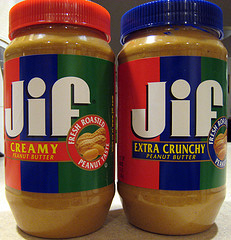 Today? Today was an intense day. Not really bad….just wildly intense. Just to give you a few highlights, I started out with over an hour’s discussion with the older boys (before I’d even gotten out of bed in the morning). They weren’t getting along. All told, I think there were 4 major conversations, ranging from relationship and self-confidence issues, being cool in public, to nuclear attacks and the resulting fallout.

By dinner time I was wiped out.

Anyhow, two additional issues today were Captain Earthquake throwing fits because he wasn’t in the mood to do his schoolwork. I very calmly gave him a choice the first time: do it now with a pleasant demeanor or go hang out in his room until Hubby got home and do his work with dad. At the time Hubby wasn’t due home for 6 hours and I quite suddenly had a pleasant hard-working boy on my hands. Yay.

The second one was later in the afternoon. We’d finished lunch and the Captain didn’t want to do his phonics first, he wanted The Manager to do the lesson. He was laying on the floor and the whines were starting. I was just helping myself to a banana and peanut butter when I looked at him and said, “I want to put peanut butter in your belly button.”

Internets, I have no idea where the inspiration came from, but it worked. He thought that was the funniest thing ever and said yes. So I took a small bit of peanut butter, smeared it on his belly and he ran off laughing to show big brothers.

A few minutes later he was all cleaned up and cheerfully did his phonics and life was good.

Chances are this isn’t a parenting technique that I can repeat, but it did work the first time. I’m going to call that a success and walk away.

Have you done anything nutty* to get a laugh out of your kids?

*Ooooh, ouch. Didn’t intend that pun when I wrote it.