My Day In Court 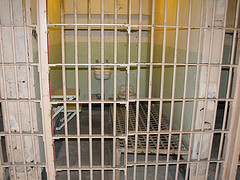 Last May the boys and I went to the city to visit a museum and we walked over to the fish ladder. When we returned to the van we were horrified to discover a parking ticket on the windshield. I’d checked the signs and parked in what I thought was a legal spot. Turns out, the city didn’t have a sign very well placed, and the museum’s sign had, ummmmm, interesting grammar. So I got hit with a $30 parking ticket.

My parents got the same ticket. I was all set to send in a strongly worded letter with my payment, but my dad said “No Way! I’m fighting this!” Well, I figured if he was going to stand up for himself then I would too. It took all summer to get the ticket assigned over to traffic court because I was conducting transactions via mail and telephone. In addition, the City spent several weeks investigating the complaint before deciding that I was at fault and issuing the fine.

Yesterday was finally the day of the hearing. The older boys and I drove downtown and found our way to the courthouse. It’s a 12-story building, which was pretty exciting. We rode up to the 7th floor and the boys immediately ran to the floor-to-ceiling windows to look out at the street. (I stood back a few feet.)

We were in the courtroom a little early so I whispered with the boys about the jury box, where the magistrate was going to sit, and so on. There were a couple of police officers there waiting for cases. At first all was quiet but then the two officers started laughing and joking with each other. My boys were quite surprised; they thought that cops were only ever serious.

Two cases were called before mine and in each the driver was found responsible and assigned to pay their fine and court costs. As the second defendant was assessed a hundred and twenty dollars for rolling through a red light the boys’ eyes widened. “You do that!” they said.

Annnnyways. I was all ready to plead my case. My parents had lost their hearing 2 weeks before*, so I had photos of the signs, an email from the city traffic department saying that the sign now in place was installed in July (my ticket was issued in May), a map showing how I’d driven into town, even satellite imagery (thanks, Google) of the museum parking lot.

Then my case was called. The traffic officer had not shown up, the magistrate looked at me and said, “Case dismissed” and it was over. I was kind of bummed. Didn’t he even want to see my pictures? I was innocent, I tell you!

Oh well. It was great fun showing the boys how a courtroom operates, and we rode up to the 12th floor to get the view. The boys were fascinated with the building, the metal detectors, and the historical displays.

Plus they didn’t have to watch me get hauled off to jail or anything.

*My parents filed their appeal, so maybe they can use my satellite photos….