Do Parents Live Vicariously Through Their Children? 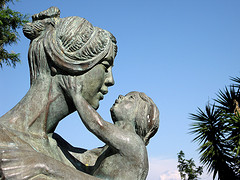 April’s guest post from Monday about what makes good parenting had a line that said “most parents end up living their dreams vicariously through their children, or pushing their desires on them in the belief that they’re looking out for their child’s interests and doing what should be done for their future welfare.”

The part that interested me was the “most parents” part. April isn’t the first guest author to accuse parents of malfeasance.

Kathy wrote in Ambition, Your Child, and You that “The problem with most parents today is that they tend to force on their children ambitions that were once upon a time theirs, ambitions that went unachieved for lack of support, motivation and/or the lack of opportunity. And so when they have children to boss around, their dormant and unachieved ambitions come to the fore, and like tentacles, they wrap themselves around their children. Whether the child is interested or not, he or she is forced to attend dance lessons, tennis classes, piano tuitions, and so on and so forth. Meanwhile, the proud parent goes around bragging to anyone who is willing to lend half an ear how talented their youngster is and how he or she is a prodigy in the making.”

Sara in Do Interfering Parents Raise Successful Children wrote that parents are “trying to live their dreams through their children, little realizing that they’re destroying their children’s dreams in the process” and “They want their kids to be the best in any field; they don’t care that their kids are happy with just being children and are not interesed in being competitive”

Those are some strong statements.

This begs some questions: What is your experience? Do parents live vicariously through their children? Did your parents? Do you? I have my own thoughts on this, but I want to hear yours first. Would you take a few minutes and leave a comment for me?

Earnest Parenting: help for parents who don’t want to damage their children.