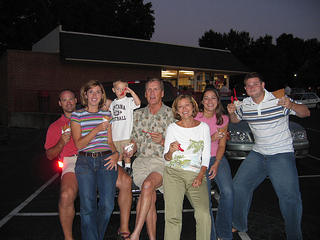 Ask any parent about the importance of responsibility, and you’ll get the same answer. All parents want to raise responsible children, but the results parents get vary substantially. As H. Jackson Brown so eloquently stated, “Live so that when your children think of fairness and integrity, they think of you.”  Responsible children are better equipped to function in the working world, have fewer difficulties getting along with their parents and are more likely to make friends.

Developmental psychologists are scientists who study all aspects of children’s development, and they’ve done substantial research into the way different parenting styles affect children. They’ve found that there are three distinct parenting styles that can influence children’s ability to take responsibility, and have overwhelmingly concluded that one parenting style is much more effective than the other two.

Authoritarian Parenting
When parents talk about the “good old days” of tough rules and little concern about self esteem, they are typically referring to an authoritarian parenting style. Authoritarian parents are very strict and quick to dole out punishments. They are also less likely to reward good behavior. These parents frequently discourage their children from expressing their own opinions and questioning their parents and might refer to this behavior as “back-talking.”

Authoritarian parents are generally more interested in rules than in fun. Authoritarian parents might, for example, focus on getting their child to clean out the litter box or change out the dog wee wee pads rather than encouraging them to come up with a new trick to teach the dog, or play with the kitten.

Permissive Parenting
Permissive parents are parents who want to be their children’s friends. They are typically very warm and engaging with their children but have trouble setting limits. For example, when the family gets a dog, permissive parents are unlikely to establish the rules about taking the dog for a walk, keeping them groomed, cleaning the dog’s teeth, or training the dog. They are more likely to perform these tasks themselves, reasoning that childhood should be fun and carefree.

Unsurprisingly, children of permissive parents have difficulties understanding rules or following guidelines because their parents do not establish clear boundaries. This can lead to difficulty completing basic tasks in school as well as long-term trouble understanding social responsibility. Children raised without rules never have the opportunity to understand that some behavior is never acceptable and also never have the chance to question whether some rules are just. This leads to challenges with responsibility and also makes these children easily influenced by others, especially friends.

Authoritative Parenting
If parenting styles were a part of “Goldilocks and the Three Bears,” authoritative parenting would be the “just right” in between too hot and too cold. Authoritative parents are warm and friendly with their children, and tend to reward good behavior rather than punish bad choices. While these parents allow their child to question rules and parenting decisions, they establish strict boundaries and enforce the rules. They are unlikely to give in to temper tantrums or whining.

This parenting style encourages responsibility in several ways. Children must understand rules in order to develop basic responsibility. Higher level moral reasoning also requires that children understand that authority figures aren’t always right. Because authoritative parents allow their children to ask questions and express opinions, children get practice from a young age at not only obeying rules, but also understanding them. Finally, the warmth authoritative parents show their children encourages children to display compassion and kindness to other people, which is a major component of responsible behavior.

Parenting is challenging, and raising responsible children isn’t always easy. But by setting clear rules and encouraging your child to express herself openly and honestly, you take a major step toward raising a competent, responsible adult.

About the Author:
Jane Warren is a freelance writer specializing in lifestyle, family and pet-related topics on her site, www.pamperthepets.com. Her valuable insights and money-saving tips have helped numerous people live happier, more fulfilled lives.