Sometimes, Life Can Be a Whirlwind 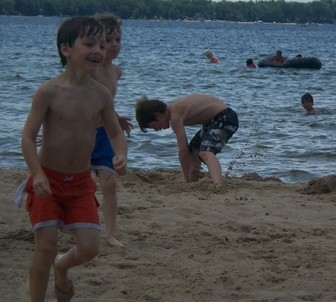 So yea. Wow. Life has been more than a little hectic as of late. But it’s good. Just crazy. I’m the co-director of our local Vacation Bible School (9 churches get together…it’s HUGE!), and I have to have all my tasks done in the next 36 hours, because then I’m off on an adventure. When I get back, VBS begins. This means that I’m running errands, making phone calls, and printing off all sorts of exciting items that we’ll need next week.

I have been so busy that I haven’t had time to publish anything here. But parenting continues around here. Highlights: The Mercenary was Junior Counselor at camp for 3 weeks. He had a ball, and grew quite a bit. He’s still exhausted, even a week later.

The younger boys just this morning had the expander plates removed from their mouths. It was much more traumatic than I expected, but they did very well and now have much straighter teeth with more room in there for new teeth to come in.

TechnoBoy has been playing soccer quite a bit this summer, and he’s going to start playing with the high school (high school!!!!!) team soon.

We’ve had our house on the market, and expect to be wrapping that whole thing up very soon. Did you know that having a house on the market is stressful? Because it is. I look forward to that being over with. Although the perpetually clean house has been handy. But I’m ready to be done.

The younger boys showed their guinea pigs at the fair, and won 5th and 6th place in showmanship yay! We’re now officially looking for new homes for the little guys (the guinea pigs, not the boys) because they’re ready to be done with 4H. I absolutely love 4H, but we have to prioritize and not be spread so thin.

We’re coming up on the last year of Cub Scouts and official 5th grade for the younger boys. I can’t believe we’re so far along in their lives already. And don’t talk to me about the older ones going to high school. I’m still in denial. They’re going to the public school, by the way. Did I mention that? It’s bittersweet, really. I am SO excited for them, because I know they’re going to have a great time. But it’s sad too, because I don’t get to be there. I gotta let ’em live their own lives at some point, right?

Oh! And the older boys made Life Scout. This is the last rank before earning Eagle Scout rank, which only 2% of boys attain. They have no idea what a big deal this will be. They will later on, looking back.

So yea, wild and crazy here. But good. Paring down on the number of activities and not having the house up for sale should reduce the stress levels. Oh! And I started a new enterprise, which I will tell you about some other time. For now I have to tend the printer, cut up the notes, and make a couple of phone calls. Then dinner, meeting, and some panicked sewing to end the day….

And we’ll get back to regularly scheduled posting tomorrow.