Use Super Heroes to Teach Ideals and Confidence in Kids 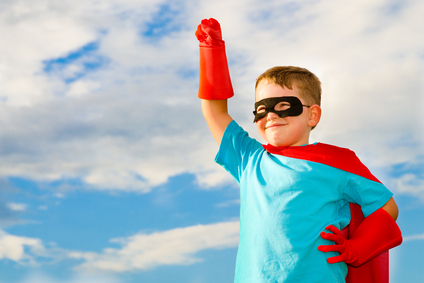 Almost every kid loves super heroes. Whether kids indulge in this by dressing up as their favorite hero for Halloween, spend their weekend mornings watching super hero cartoons on TV, or lining up with their parents to see the latest super hero movie.  Kids and superheroes have had a relationship that stretches back through the decades.  Because of this long standing connection and respect, super heroes can be a great tool to teach your kids ideals and confidence.

Aquaman Helps Everyone
Aquaman was born and raised in the water. It is his home and where he is most comfortable. He does what he can to keep the globe’s oceans a safe and happy place.  However, this is not where he stops doing good for the world. Because his special physiology allows him to live on land too, he doesn’t hesitate to help fight off the land lobbing villains, and to protect the dry residents of the dry world. He doesn’t do this for any personal benefit, but because he realizes that he is in a unique position to help people with their threats and problems.

While your child may not have the same powers as Aquaman, he or she certainly has some unique abilities that everyone can benefit from.  Aquaman’s visits to the surface started with pollution in the sea.  Instead of destroying the surface dwellers, he decided to help them and clean up their waste in a positive way.  If you see someone littering, you can mention to your child that Aquaman wouldn’t litter and that they should help pick it up and throw it in a garbage can or recycling bin.  This will help to teach them that there is more to the world than what immediately affects them.   You can also teach them that if they want to be a hero, they must start by helping those who can’t necessarily give them anything in return, like the earth.

Spiderman Knows the Value of Modesty
Superman holds press conferences and is the offspring of an extremely powerful alien race, Iron Man relies on money and technology, but Peter Parker – well he just happened to be a scientifically minded boy who was bitten by a radioactive spider.  He does the best he can, but he never gloats, takes credit for his acts of heroism, or even interferes with Mary Jane’s personal life. Even though Peter Parker could easily use his alter-ego to gain immense fame and fortune, he uses his powers for the greater good, not to just give him an unfair advantage with Mary Jane. Instead, Spiderman does what he needs to do, and helps how he can, and then he moves on with his life. This reputation has led to Spiderman being considered amongst the most morally upright superheroes of all time.

You can use Spiderman’s integrity, honesty and modesty as a way to teach your kids help others. For example, when Spiderman discovers his unique abilities, he doesn’t immediately show them off, but instead uses them to fight for good. Similarly, if your kid gets a new toy that everyone else wants, you can remind them to act like Spiderman, and not show it off, but rather to use their toy to help spread fun and joy with the other kids by sharing it. If your children use their strengths and powers for everyone, not just themselves, they will quickly find their reputation reaching heroic levels.

Batman Conquers his Fear of the Dark
Right now, Batman is probably the biggest superhero of them all. What many children might not know is that after the tragedy that befell Bruce Wayne’s parents during the night, he was left with an intense fear of the dark. Then, after falling into a bat cave, Batman realized that the dark was nothing to worry about. This allowed him to conquer his fear and come out stronger than ever. After that, he was determined to make the night a time for criminals to be afraid, not the residents of Gotham City.

Batman not only overcame his fears, but actively works against them to help other people feel safer too.  Once he realizes that he has nothing to worry about in the darkness, he makes sure that only criminals should need to fear it.  If your child is afraid of the dark (or anything else that cannot hurt them) you can read them Batman comics about how he was able to overcome his fears. Focus on how Batman realized that he had nothing to worry about from the dark and this allowed him to become one of the bravest super heroes of them all. Another thing that may help is to get your child a set of kids Batman pajamas to wear to sleep at night to help increase their confidence. After hearing stories about Batman overcoming what he was afraid of, fear of darkness may no longer be an issue.  At this point, your child can begin telling their friends the techniques that worked for them.  This could help fight back their fears in the same way Batman makes the residents of Gotham City feel safe at night.

Superheroes and kids have had a long and enduring relationship, stretching back from comic books more than half a century ago, to the biggest cinematic block busters now. Between this and the fact that super heroes are by nature benevolent and heroic, they can serve as great moral role models for your children to become more confident and live up to their ideals.  When they are in a trying or scary situation, they can imagine what their favorite super hero would do, and if they follow that hero’s moral compass, they may make it out just fine.