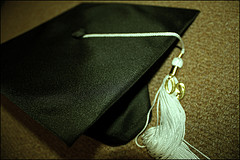 Statistics suggest that overall high school dropout rates have declined in the past few years – which we cheer – but the numbers still remain disturbing. More than a million students who should be graduating this year will not.

There’s another side to this story, however. It’s one that few people address, but yet it’s one that cripples a young person’s best shot at success. Because for every student who drops out physically, there are other students who drop out emotionally.

Sure, they still show up on campus, and they generally attend classes; the roll call will show them in their seats, present and accounted for. But they have checked out of the process of learning.

Teachers are able to identify these emotional dropouts: they sit with arms crossed, either mocking the teacher’s efforts or not participating at all. What’s more troubling is that too often they influence other students to do the same. They’re in class, but they’re not in the game.

In some ways these students are doing themselves more harm than traditional dropouts. Sure, both instances are regrettable, but there are subtle differences.

For one thing, some kids leave school for reasons unrelated to their academic progress. Some have financial issues at home; some leave for health reasons; others – although, granted, not many – drop out to begin their own business. The point is, there are mitigating circumstances, and either the student finishes school later, gets his GED, or finds another route to educate himself.

But when a student drops out of school emotionally – when he decides that learning is uncool or a waste of time – he’s laying down a foundation of failure. In essence, he is rejecting the very notion of learning, and establishing the framework by which he’ll spend the rest of his days.

I applaud those who invest time and effort into reducing the number of school dropouts, because the data show just how harmful that lack of diploma will be throughout a person’s life. The monetary figures alone are alarming.

For the students who remain enrolled, though, we can’t quantitatively measure the results; there are no yardsticks by which we can compare the success rates of enthusiastic learners against those who merely show up. And yet, we really do know the differing outcomes, don’t we?

It’s in everyone’s best interest to make sure that students remain engaged with the process of learning. That often begins with our own attitude toward education; young people are, after all, mimics of a parent’s behavior. It also means capturing their attention with updated and real-life lessons, ones that blur the line between school life and the outside world.

And ultimately it will rely upon positive pressure from their peers. Once we eliminate the derogatory association with the terms thrown at academically-successful students (dork, geek, nerd), and allow those labels to evolve into positive affirmations, we remove the stigma attached to ‘smart kids.’

Listen, there’s a smart kid holed up inside almost every student; some of them let that spirit shine, while others allow their fear of mockery to hold them back. When more young people embrace the benefits of learning – and when they begin to visualize what the learning process will do for them later in life – we’ll quickly reduce the number of emotional dropouts in our school system.

Fully-engaged students not only help teachers accomplish their mission, they help the rest of us through their contributions to society. We not only must keep more young adults in school, we must keep them into school.